How to reduce stress and the risk of infection

A man wearing a mask boards an airplane.

Christopher Sanford was eager to get on a plane after getting the shot in January. So far, he had flown only once during the pandemic – to visit his mother in Texas.

“The whole world has cabin fever, and everyone wants to travel now, including me,” said Sanford, associate professor of global health at the University of Washington.

So three weeks ago, Sanford and his wife traveled to Turkey, alongside a host of travelers embarking on their first flights in more than a year, as the vaccine rollout in the United States affected more than 50% of adults.

Over the past two months, the average daily passenger count recorded by the US Transportation Security Administration has increased 30%, from about 1.2 million in March to 1.6 million in May. Booking Holdings, a travel agency that owns search engines like Priceline and Kayak, said its airline ticket sales jumped 49% in the first three months of 2021.

But Sanford said many of his patients still wonder if traveling is safe – especially when airports are crowded.

“I am very encouraged that things are slowly returning to normal, but there is a tremendous amount of fear even after people have been vaccinated,” he said.

South Africa now has more than a million people vaccinated, although many have only received the first dose of a two-dose regimen, and will not be able to travel freely until August.

Flying was fairly low risk even before the vaccines An air hostess wears a mask in the air.

The United States Centers for Disease Control and Prevention recommends that people delay all travel until they are fully immunized.

But scientists have not documented many cases of coronavirus transmission on flights, most likely for two reasons: Airplanes have strict requirements for masks and strong air filtration systems.

Air typically enters through vents above your seat and then exits an aircraft through nearby ground level vents, meaning it doesn’t flow throughout the cabin. It is also filtered through High Efficiency Particulate Filters (HEPA), which can remove coronavirus aerosols (small airborne particles produced when people speak or breathe out).

“If someone is right next to you and they have Covid and they take their mask off, it increases your risk,” Sanford said. “But if they are several rows back, even if they are not wearing a mask and have Covid, their exhaled air will likely pass through a filter before you inhale it and the risk would then be very low. . “

A November study found that the rate of in-flight coronavirus transmission was only 1 case per 27 million travelers. In comparison, the rate of fatal car accidents in the United States is about 12 deaths per 100,000 people.

Read more: South Africans will have to wait – maybe just a little longer – for flights to the UK

Keep your mask on as much as possible In addition to getting vaccinated, masks remain our best defense against transmission on airplanes, Sanford said.

A September examination found no secondary cases of Covid-19 on five Emirates flights with up to 2,000 passengers in total. This is despite the fact that 58 passengers on the flights tested positive for the coronavirus. The researchers attributed the lack of transmission to the airline’s strict masking protocol.

Simply put, “the more masks you wear the better, the less the worse,” Sanford said. The riskiest parts of the trip, Sanford said, are the stages leading up to a theft: cramming into buses that take you to a terminal or mingling with the crowds while waiting to board. He recommended asking a friend to drive you to the airport and then finding a relatively secluded place to post at your terminal.

If possible, he added, opt for a non-stop flight.

“The more stops, the more people there are, the more airports, the more mix,” said Sanford.

Each of these increases your risk of infection, although the risk is low.

For short flights, eat before you arrive Travelers eat a snack while waiting at Schiphol Airport in the Netherlands on March 11, 2020.

On some flights, travelers can remove their mask while eating or drinking. That doesn’t necessarily mean you should, however.

Sanford recommended keeping your mask on for the duration of a short flight, which would require eating before arriving at the airport. For longer flights, like Sanford’s recent 13-hour trip from San Francisco to Istanbul, you’ll likely need food and drink.

“If you’re doing a seven-hour flight, it’s not good not to drink water for seven hours,” Sanford said.

No need to put on your mask between bites, he added. 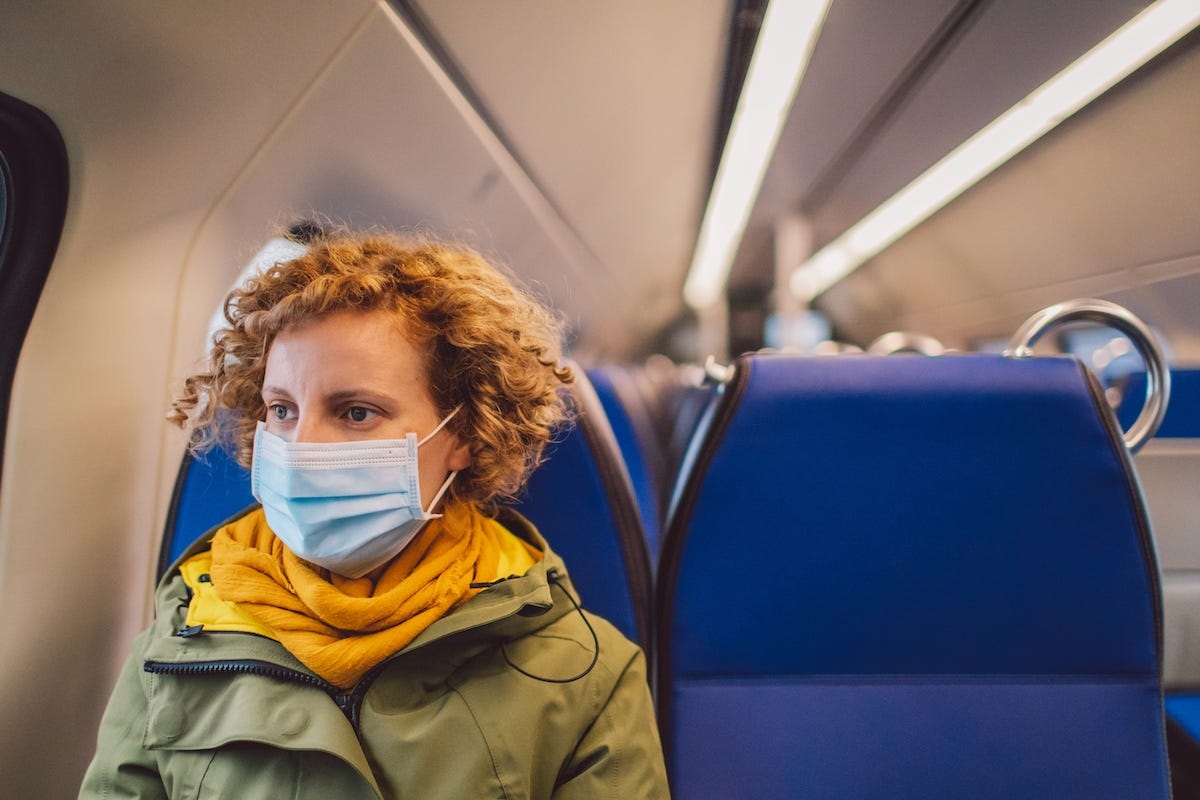 A traveler sits next to an empty seat.

Research indicates that blocking the middle seats in airplanes can reduce the risk of transmission on board.

An October pre-publication, which has yet to be peer-reviewed, found that the likelihood of a coach passenger contracting Covid-19 on a two-hour domestic flight was 1 in 3,900 if all seats were busy. But when the middle seats were left empty, that risk dropped to 1 in 6,400.

As for other seating choices, Sanford said there wasn’t a lot of data to suggest the window is better than the aisle or vice versa. Research so far has been mixed: A December study found that the secondary attack rate of the coronavirus on a domestic flight in Australia was higher among window-side passengers than in aisle or middle seats. But other studies have shown that people sitting in the aisle seats have more contact with other travelers during flights, which can increase their risk of infection.

Splurging on a first class ticket won’t reduce your risk A section of Delta First Class on a flight from Phoenix to Minneapolis.

Although the first-class seats are spaced further apart, Sanford said it likely won’t reduce your risk of infection.

“I don’t think that’s a huge difference and I wouldn’t jump for the money,” he said.

Indeed, a study last year documented a case of coronavirus transmission in business class. A 27-year-old woman transmitted the virus to 12 other business class passengers on a 10-hour commercial flight to Hanoi, Vietnam. Those most at risk of infection were those within two seats of the woman. A relative of a Covid-19 patient breaks down at LNJP Hospital in New Delhi, India on April 21, 2021.

According to Sanford, the number one concern with overseas travel is whether you will be able to receive proper medical care at your destination.

“It would be really bad for you and for everyone involved if you currently have Covid in India, with the health system there already full of patients,” he said.

Still, Sanford added, there is no need to worry about whether the airport you are flying to has a lot of international travelers.

“I’m not telling people to avoid international hubs,” he said. “I tell them to avoid the crowds.

Receive a daily update on your mobile phone. Or get the best of our site by email

Go to the Business Insider home page for more stories.

Safety guide for the rainy season

Everything you need to know about reviews, features and more

Auto Scams and Fraud: A Safety Guide for Buyers and Sellers